The Two Truths of Winnicott 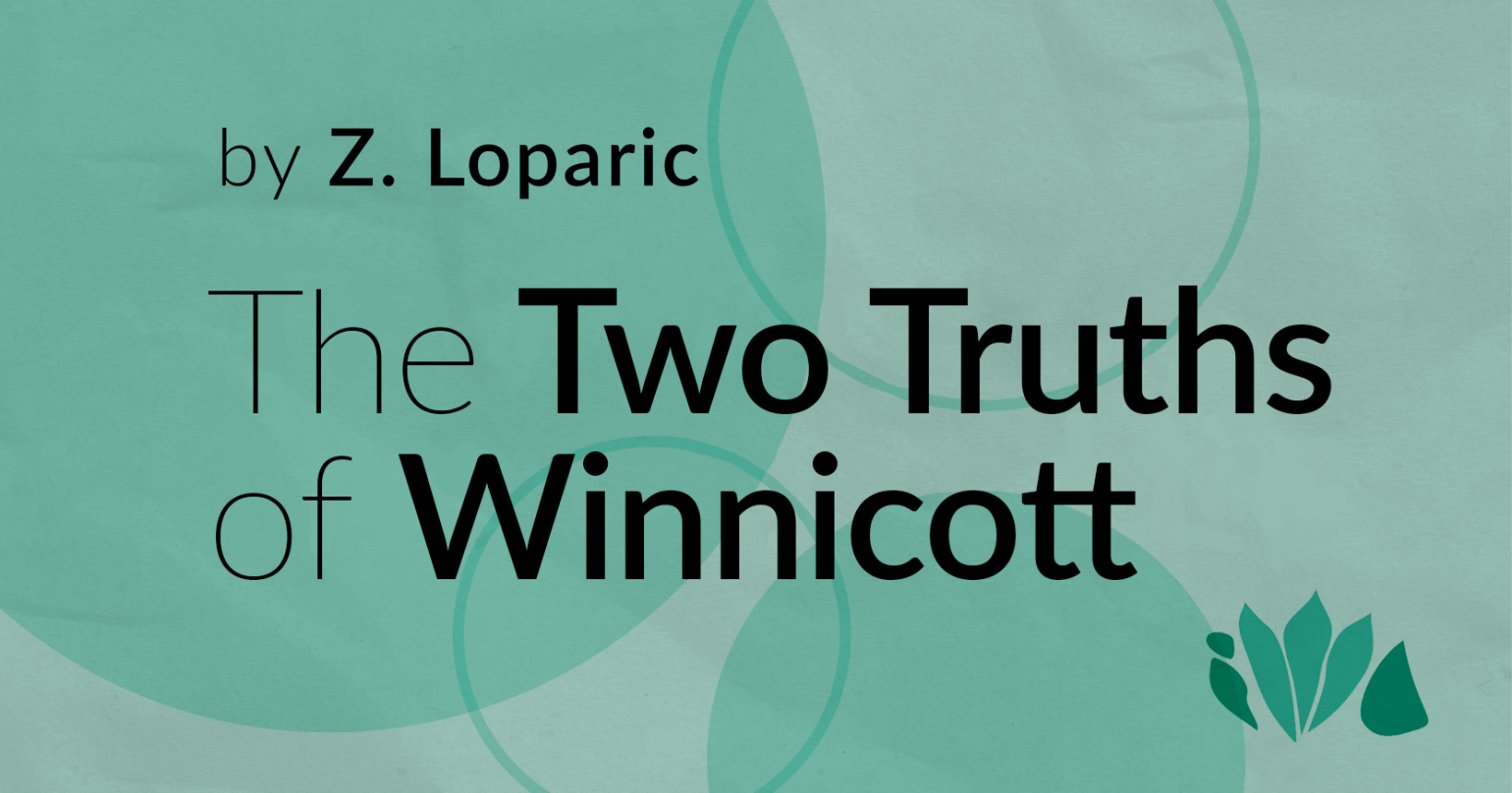 The Two Truths of Winnicott

Winnicott is not a man of just one truth. His truths are many, of different ages, his own and those of others, and of all humanity, and he has them all within himself. The truths are of various types: scientific, poetic, philosophical, religious, mythical. And he utters them in multiple modes of expressions: in the jargon of specialists, who use technical terms with conventional meanings in a perpetual flow, and in common language, wise to the poetry in the etymology of words (Heidegger used to say that common language is the fundamental poetry of a people), to the stories of words struggling with other words for their identity, to the tales words tell, to the power they exert over those who use them. He expresses them in his writings, quoting patients; in the verses of poems he mentions or himself writes; or in what he says, by not saying it. He reaps truths in different ways. And uses them for different purposes.

Winnicott focuses specifically on two truths: the scientific and the poetic. The former derives from scientific research. Leaving aside the formal sciences for a moment (mathematics, logic, etc.), inquiries into a factual science imply problem-solving activities in a field of facts guided by a research project. The subject matters are physical nature, since the Greeks, the animate nature of life, especially since Darwin, and human nature, since Freud. Our empirical knowledge of what indeed happens is notoriously scant. We lack knowledge of facts and of their temporal and causal order. Scientists do not resort to explanations that abide by supernatural factors of a religious kind, which might suggest fear of the unknown. They don’t divine secret meanings behind missing facts and connections. Nor do they set out on the fast track of intuition and fantasy. They assume their own ignorance and draft a research program to, step by step, pursue unknown facts or nexus. Yes, they do isolate and deprive their data and unknowns of subjective meaning by objectifying them. And they allow themselves to wait out until they find what is missing. This means scientists do have some kind of faith – not faith in this or that, but faith that it is possible to formulate and solve  problems observed within the framework of the outlined program. To formulate a problem means transforming an expectation into a meaningful question, i.e., one that can be answered in the research tradition used as reference. This is the essential step.

Answers either pertain to the particular problem under consideration or further articulate the body of theory. In both cases, they come with evidence and justifications, which, however, as Winnicott emphasizes, always engender new questions – because the answers are partial, or because the justifications turn out to be flawed, or because there simply is no answer at all. Yet this is not the end of the research, but the source of new questions. For scientists, to go on asking questions is practically everything, the true manifestation of the creative impulse in the realm of science. Thus, scientific truths, whether about particular matters or general, theoretical ones, are obtained piecemeal, through a never-ending Q&amp;A game. They are never absolutely certain, let alone complete. The idea of ​​consummate knowledge is a true nightmare for scientists. A scientist shudders, says Winnicott, at the very thought it. Doubt, methodological doubt, which is the exact opposite of dogmatism, is the main engine of creative research in science.

More than attaining truth, what is important in science is the construction of a satisfactory path towards truth – the method. This is why scientific training is so crucial: it enables us to intersubjectively test our little fragments of the world. Our personal feelings can easily get out of hand; our imagination, allowing itself to dream – like the dove of Kant’s speculative reason, given to dogmatic dreams and undisciplined by experience – can make us soar to the heights, until air is no more, until we feel nothing is supporting us and are already falling and falling. Then there is nothing left for us to do but to wake up. This means returning to science, Winnicott clarifies, to the welcome external reality, to the object of free thought, achieved in the West through fierce struggles over centuries, free indeed, but not from well-tested theories, but rather from affiliations imposed by indoctrination or repression, which, in the not too distant past, sought to destroy ideas by burning people. Something that activists can now do online.

How and when does a human individual begin to become a scientist? From childhood, from the cradle, if he or she can count on good enough maternal support. In early life, the real and the imaginary are one and the same, because the child does not apprehend the world objectively, but lives in a subjective state where it is the creator of all things. We all begin life in a state of wonder, but are then frightened by our own dreams and magical thinking, which give us control over everything but keeps us in the illusion of omnipotence and in uncertainty. If external reality is presented to the child in small doses, carefully calibrated to its capacity for understanding, the child gradually becomes aware of the not-me world and, as it perceives external reality, will seek support in real external things, which, because they exist in time independently of the child and have a nature of their own, promise to be more reliable than dreams. Gradually, the child may eventually adopt a scientific approach to phenomena, and may even employ the scientific method in the study of all aspects of human nature and in planning its own life. Often, however, a scientific interest in the external reality represents an escape from the intuitive and subjective approach to life.

This scientific path towards the truth – which, if it really matters, is imaginative, creative and non-repetitive– differs, as Winnicott notes, from another one that relies on intuition. It is easy to see the contrast. Intuition may claim to arrive at the whole truth in a lightning flash, but if it is wrong, it can, in an instant, mislead us about everything there is. The poet in us acquiesces to the truth in a flash. This truth does not concern external facts alone, nor is it made up of the baby’s merely subjective creations, but rather of the fabric of the world in which we combine, in our own personal pattern, things we experienced in the past, things of here and now, and those that we might expect in the future. The poetic value of a dream of mine does not lie in having been created by me, but in the overlapping layers of meaning related to the past, present and future, to the internal and the external, and always to myself as someone out there in the world.

The Americans landed on the moon and moon lost her poetry. Yet poets can still write odes to her, says Winnicott, as if no one had landed there, as if the moon’s brilliance and splendor, majesty and mystery, still meant things to those who contemplate it from here. We can all go back to the time when we knew what shadow and light meant. If we can return to poetry and recover from the American moon landing, we might feel that civilization still has some hope in the age of technique. Winnicott did not wait for the poets and wrote himself a poem in protest against the technological objectification of the moon, which reads: “This is not my moon / […] / This is not the tide-master / Nor the phase-determinant of women’s bodies” – a poem preceded by his request that we retain the emotional, fantasy side of things. For even if we assent to take logic to its extremes, believe in objectivity and wish to look at things directly to do something about it, we must never make things tedious by forgoing fantasy, unconscious fantasy.

Like scientific truth, poetic truth has its pros and cons. It promotes personal integration accompanied by deep personal satisfaction, and offers the opportunity for a new experience, that of beauty. Intuition is quicker. We need poetry to articulate the overall problem of the universals of human nature – more specifically, to know what is really at stake in a human life. Scientific objectification disconnects things from their personal senses. But it is very difficult to use poetic truth, which is a matter of sentiment, to enunciate common problems and to create common social practices. The great poets may have alluded to psychotic breakdowns, but the flashes of intuition that stem from poetry cannot exempt us, says Winnicott, from the painful task of scientifically overcoming, step by step, our ignorance of this matter. To study the ways of creating and maintaining the democratic machine without falling into mere militancy, we need a scientific theory of personal and social maturation. Likewise, for the judge of a juvenile  court to make responsible decisions on juvenile delinquency cases, he or she must be able to rely on a psychology of delinquency established as a science.

Individuals may choose one way over the other, much as Western culture tends to exclude feelings for scientific thinking whereas in Eastern culture the scientific method is relatively spurned. Winnicott maintains that we need both paths to live – and even to do science. It is ludicrous not to include the study of the unconscious in the vast realm of scientific theory. Yet, at the same time, we will remain culturally poor if we are not familiar with the poetry of words and the ability to create imaginatively.  Our Western culture, at its best, resorts to the scientific method when dealing with facts while its art and religion acknowledge the importance of a non-objectifying approach to life, i.e., of fantasy and the spontaneous expression of instinctual impulses.

Winnicott followed in Freud’s footsteps in considering psychoanalysis a science, that is to say, a problem-solving activity based on a method and on a growing body of ttheory; a disciplinary matrix acquired through the accumulation of resolved problems, often interrupted – due to crisis situations generated by legitimate, but anomalous and intractable problems – by revolutionary changes in the body of theory. Starting off from the problem of managing human life in family relationships – the Oedipal triangle – Freud elaborated a general theory of the development of the sexual instinct, of the intrapsychic tensions that accompany such development (sexual pathology), and a therapeutics for this type of disorder based on the verbalization of transference material. Winnicott noticed that the Freudian matrix centered on sexuality (Oedipus) was ridden with anomalies and could not account for the early disorders of infants and children. More: having envisioned humans as essentially relational beings, Winnicott then formulated, as a basic problem, the mother-baby relationship. He replaced the theory of sexual development with the theory of emotional development, culminating in the theory of personal maturation. And he radically extended the concept of transference to include psychotic transference, proposing, as therapy, a modified analysis (management cum verbalization). Winnicott wrought a revolution in psychoanalysis, but that was the price to pay for the progress of this discipline.

Freud was more than a scientist. After being awarded the Goethe Prize in 1930, he was enshrined in life as a thinker of culture. Winnicott never received such an award, but he inscribed his name among the great thinkers of cultural experience by publishing, in the year of his death, Playing and Reality.

About the article: Originally published in Portuguese on August 17, 2022, in the column “The place in which we live”. An on-line column from the Winnicott Institute in Cult Magazine.
https://revistacult.uol.com.br/home/as-duas-verdades-de-winnicott/