Body and Psycho-somatics in Winnicott | Preface by Elsa Oliveira Dias 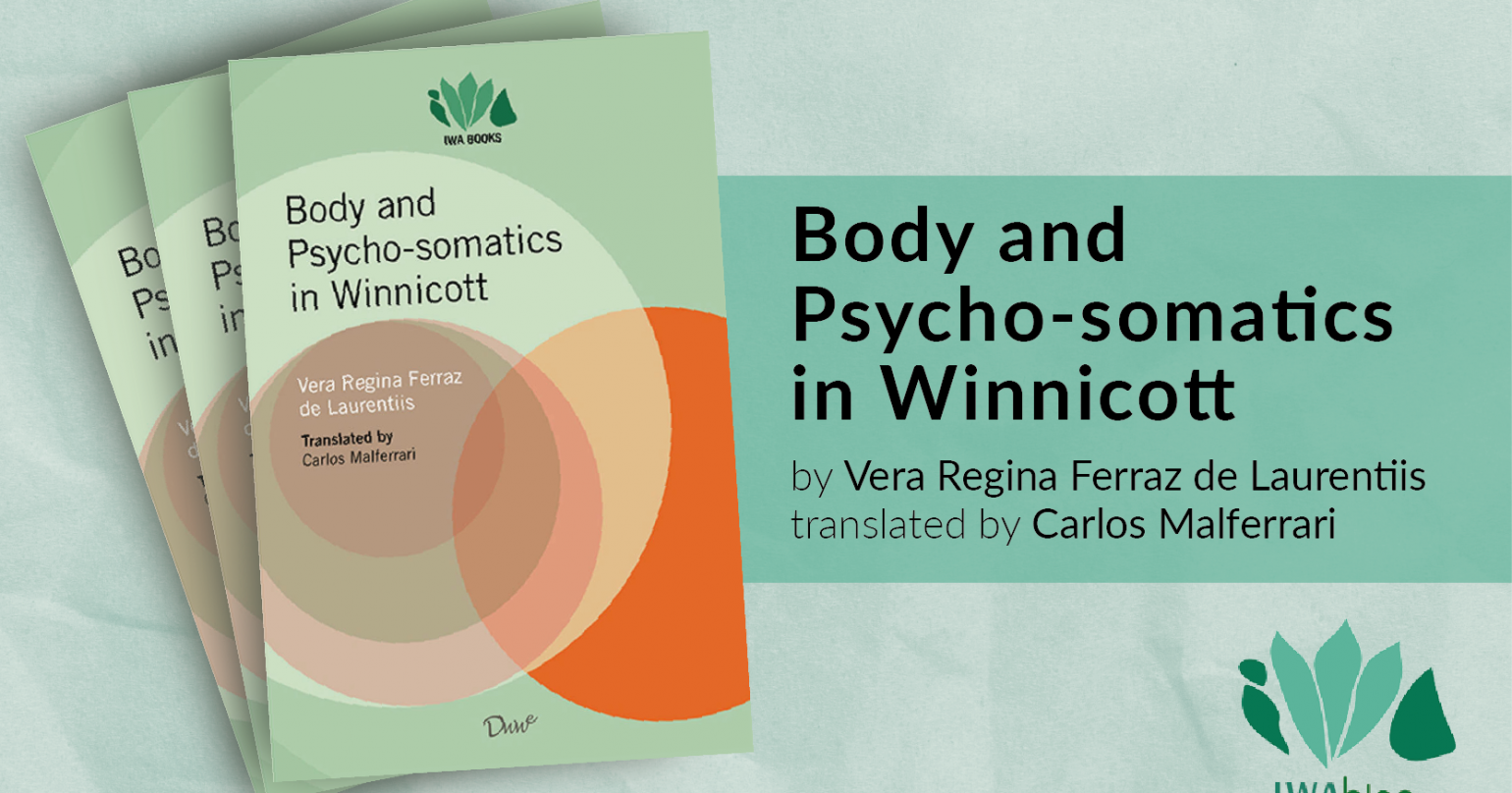 This book surveys and reflects upon one of D.W. Winnicott’s most decisive contributions to the study of human nature and to psychoanalysis, namely, his notion that human nature is essentially psycho-somatic and that the cohesion between psyche and soma is not a given, but is rather an achievement of maturation – an attainment that depends on environmental care, especially that provided to the infant in early life. Psycho-somatic existence is ingrained in every aspect of Winnicott’s thought; his psychoanalysis is truly incarnate, as the author of this book, Vera Regina Ferraz de Laurentiis, shrewdly says.

As with other fundamental tasks of the primitive stages of maturation –integration in time and in space, the onset of object relations – the roots of the integration between psyche and soma (which Winnicott calls personalisation) are likewise set deeply in the primitive experiences offered to the infant. For Winnicott, everything that is solidly planted in this native land becomes better established in the personality and less vulnerable to the vicissitudes of life. The same is true regarding the achievement of the psycho- somatic partnership: every subsequent achievement depends on the proper resolution or failure of this partnership in the infant’s early days.

From a Winnicottian perspective, immense and almost unbelievable is the multiplicity of possibilities, as well as, on the other hand, of impingements that derive from whether or not the infant, over the course of its early life, had constant experiences of psycho-somatic cohesion (which will be incorporated as body- schemes integrated into the self) or, conversely, a lack of such experiences, preventing it from inhabiting the body as its dwelling place. The result of such failure is, as Winnicott says, the ‘uncertainty of indwelling’, (W19au, p.113) that is, depersonalisation, as the individual does not feel his or her dwelling place as guaranteed, but rather as something that can often be lost.

It is this immense, complex, varied and subtle horizon that Vera deftly scrutinizes, following Winnicott step by step – in the wide corridors opened up by his perspective and in each nook and cranny of his thought – along every stage of maturation. The breadth of this issue is mind-boggling and Winnicott goes so far as to say, in a 1966 text, ‘The psycho-somatic disorder’, that ‘there is no area of personality development that escapes being involved in a study of psycho-somatic disorder’, (W19au, p.110-1) implying that, whatever the set of problems at hand, the issue of the essential interaction ‘between the personality of an individual and the body in which the person lives’ (W19ea, p.561) must always be addressed. The field that comprises all psycho-somatic phenomena, in health and in illness, is so vast and complex that, according to Winnicott, ‘as soon as an attempt is made to look into the various ways in which psycho-somatic disorder can arise [one finds that] a statement of psycho-somatic disorder cannot be covered except in a large book written by a team of writers’. (W19ea, p.561) In a text from 1970, he adds that ‘the elucidation of the general problem [of psycho- somatics] is only just beginning’. (W19by, p.272)

Vera, of course, is aware of this amplitude, and it was not with an encyclopaedic purpose that she set out to write this book. In keeping with Winnicott’s notion that ‘the material for psychoanalytic research is essentially the human being… being, feeling, acting, relating and contemplating’, (W14p, p.175) what Vera did was carefully to collect samples of how the psycho-somatic partnership, or its absence, presents itself in the various realms of living and relating, in each stage of maturation. She thus provides readers an overview of the matter from a Winnicottian perspective, gestated and nurtured by the reading of Winnicott as practised by the Winnicottian School of São Paulo, interwoven with her own clinical and personal experience.

As we read in the Introduction, this book originated from Vera’s 2008 Master’s dissertation, Somatic aspects of the achievement of the self in D.W. Winnicott. When she first arrived at the post- graduate course at PUC university in São Paulo in 2002, initially as a non-degree student, she met an existing group of scholars united around the line of research on psychoanalysis initiated and directed by Zeljko Loparic, and enhanced by the contributions of his collaborators in the Research Group on Philosophy and Psychotherapeutic Practices (GrupoFPP), established in 1995 at PUC-SP (currently based at Unicamp university). At first, the rese- arch team consisted of Loparic’s advisees, but others began joining GrupoFPP in 2005, eventually forming the Brazilian Society of Winnicottian Psychoanalysis (SBPW), which has recently become the Brazilian Institute of Winnicottian Psychoanalysis.

Even at the time of her dissertation, Vera de Laurentiis’ research work, although more restricted to specific aspects involving the constitution of the self, proved to be meticulous in details and conceptual articulations, with examples and illustrations from her clinical practice. We are very fortunate that when Vera decided to publish the manuscript, she chose to expand the scope of her work and we now have this very comprehensive exposition, both rigorous and personal, of Winnicott’s innovative perspective on the fundamental issue of psycho-somatics.

When I say personal, what I mean is that, despite this being a book of high conceptual precision on Winnicott, it is also very clearly a book written by Vera de Laurentiis: she did not want to address Winnicottian psycho-somatics with an excessively mental overtone, which might be dissonant with the main theme or immediately denounce its academic origin.

Given this, and her extreme determination to make clear the innumerable nuances Winnicott bestows us when describing very subtle aspects of psycho-somatic maturation, Vera adopted a lively and strictly personal style in her writing that can be seen from beginning to end.

And no wonder, for we find in Vera a felicitous conjunction:in addition to being an extremely dedicated analyst, scholar and researcher, matters pertaining to the body have always been vitalfor her, as she confesses in the Introduction, because like Winnicott himself, she too has always loved and cultivated dancing. The theme of psycho-somatics is, therefore, in good hands – or, perhaps, it might be said, in a good lap, apt to preserve properly the field in which psycho-somatics may be able to flourish. Everything indicates, when one reads the text, that what Vera yearns, and achieves, is to retain something of the delicacy that pervades Winnicott’s thought when, always careful not to invade or over-illuminate the sacred realm of the purely personal, he describes aspects of life and relationships that belong to the ‘magic of intimacy’.

What readers have in hand, therefore, is a veritable treasure for Winnicottian studies and for the study of psycho-somatics. Vera went to great lengths to bring to light, and to weave, almost as if in an embroidery, countless excerpts from Winnicott, unearthed at times from small and almost imperceptible passages of his clinical cases, to illustrate maturational achievements in health, or maturational failures in the case of disorders in general, with a constant emphasis on the psycho-somatic aspect of the phenomena and the consequences that come to us in our clinical practice. Nor does she shy away from any of the consequences to which the subject impels her, undauntedly examining what Winnicott calls ‘true psycho-somatic disorder’ and discussing the forms of treatment he suggested.

One of the greatest qualities of this book is that it is what it promises to be. Vera faithfully persists on her proposed theme, namely, the indwelling of the psyche in the body over the course of maturation, and she weaves articulations that allow readers to see clearly the nexuses that Winnicott’s complex thought establishes between primitive experiences and certain impingements brought forth by patients, older children or adults.

In Chapter V, for instance, Vera outlines how, for Winnicott, the primitive experience of quiet and excited states is established as a pattern, seriously interfering in future relationships. In the passage highlighted below, referring more specifically to the quiet states, she says:

When all goes well, there is also mutuality and the ability to communicate withoutwords; thus, an infant capable ofbeing peaceful in the presence of a still-undifferentiated other may, in the future, be with someone in a non-excited way – or even be alone. Failures in quiet contacts hamper the consolidation of an entire spectrum of ego relationships: the construction of possible intimacy and of a place to go back to when one is not excited. It should be mentioned that an important part of Winnicottian clinical practice rests precisely on establishing such a place of intimacy.

Another example of unearthing gems from Winnicott’s work can be found in Chapter VII, section 2.1, ‘Organising gestures, making the body personal and separating inside from outside’. After reading the excerpt from Winnicott below, readers we may observe the nexuses Vera draws:

If all goes well, there comes an end to the particular sensitive time, and you begin to hear gurglings and rumblings. This means that the part of the digestion of the milk which goes on in the stomach is becoming completed […] The point is that the gurglings indicate that the period in which the child is sensitive is at an end, and the food is now really inside. From the infant’s point of view this new stage must be a mystery, as physiology is beyond the infant mind. (W7ae, p.38-9)

This passage illustrates what Winnicott might have called ‘opacity of the body’, i.e., the living physiology exceeds the child’s ability to elaborate and does not lend itself to complete appropriation. One might reasonably speculate that the food that disappears inside and places the infant face to face with the ‘mystery’ of physiological processes can be an experiential, somatic and primitive basis for the feelings and fantasies of what is ‘unfathomable’ and ‘unlimited’ that often pervade the inner/personal world.

And Vera adds a footnote: ‘Although the ideas of building a body scheme and indwelling in the soma are fundamental in Winnicott’s theory, I reiterate that the dwelling place is not a cloister and that, in health, the inner space is open and unlimited’.

As can be seen, Vera heedfully chooses and plunges into the topics and themes that seem essential to her. It is somewhat like taking readers by the hand and walking with them along the Winnicottian trails, showing them the small details that make all the difference and that cannot always be discerned by unsuspecting eyes or by those unfamiliar with the landscapes of the new paradigm of human nature that Winnicott offers us.